So I’m reading this post-apocalyptic novel (I like those things…if the world comes to some fiery end before Christ returns, I’ll be ready!), and one of the odd little things the characters in the story talk about is time.  One night one of the characters asks several others what time it is, and she gets a different answer from each person she talks to – they had all lost the standardizing sources for their clocks and watches when they lost access to power and communication systems, and now everyone’s clock said something different. 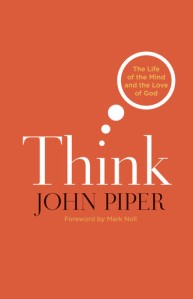 I thought of this as I was reading the book Think by John Piper.  In it Piper says, “God is the ultimate and final standard for all claims to truth-who he is, what he wills, and what he says is the external, objective standard for measuring all things.  When relativism says that there is no universally valid standard of truth and falsehood, it speaks like an atheist.  It commits treason against God.” (p. 105)

To be honest, I’ve always had a little bit of a problem with the idea that relativism is spreading.  I didn’t talk about these thoughts much, though, until I had the opportunity to speak to Sean McDowell a couple of years ago, and he echoed some of the thoughts rattling around in my head; that relativism didn’t really seem to be taking hold in the youth we had contact with, at least in the sense that they were rejecting the idea that there could be a universal basis for truth (the idea that a universal basis for truth is unknowable can also be called relativism and is a completely different subject).  Now a couple of years later, I still don’t see the rejection of universal truth in any of the hundreds of teenagers I come in contact with over the course of the year.  What I do see is a lack of willingness to take a stand on a standard of truth because of a lack of confidence in identifying what that standard is.

As Piper puts it, God is the standard – he is the measure of all truth, of good and evil.  Since God created everything, He gets to put a definition on everything; because he is immutable (unchanging), that standard stays put.  If this is the case, our understanding of ultimate truth is dependent on our understanding of Him.  Combine that fact with what seems to be the obvious decline of Christian America, and I think we may be able to better understand where our students and young adults are coming from.  The basic cultural understanding that God exists and that the Bible tells us about who He is no longer is a given.  Because of this, our general knowledge of God and of ultimate truth as a nation and as a culture is declining.  Our students and young adults simply do not want to state that they understand something they don’t.  If they don’t see the universal standard of truth – that God exists, that He is knowable, consistent, and good – then they have no basis on which to take a stand on moral subjects.

So what do we do?  Simple: start acting like Christians.  Talk to others about Him, live what we say we believe, and point others to Christ.  Practice apologetics – give reasons for believing what we believe, be humble and loving, and trust that God is in control (1 Pet 3:15).  Do what God is calling us to do daily, minute-by-minute, hour-by-hour.

I was asked by a fellow youth pastor this week how I go about teaching students, what my philosophy of Christian education is.  My response was this; I have a lesson I teach, usually every other year, called, “Why I don’t teach lessons on not drinking, smoking, doing drugs, and having sex.”  I don’t teach lessons about those things, and here is why: I have always believed the positive truth about who God is and what He has called us to do is more powerful that the negative truth about the things we aren’t supposed to do.  In my experience, the message of saying we are called to “do justice, and to love kindness, and to walk humbly with your God,” (Micah 6:8) is more powerful than “don’t lie, don’t swear, and don’t sass your parents.”  With the first, we have the promise of blessings and God’s favor.  With the second, curses.

Don’t get me wrong, the second list is still important and something worth talking about.  Just because I don’t teach lessons on not drinking, smoking, doing drugs, and having sex outside of marriage doesn’t mean we don’t talk about those things.  However, when we are focused on living a life that is pleasing to God, some of those things fall into place prettyeasily.  To talk about not having sex before marriage on its own is one thing, but to talk about it after discussing God’s plan for relationships with each other and with our spouses establishes a better foundation for following God.  The “don’ts” in the Christian life certainly exist (the 10 Commandments are an easy example), but they should be viewed within the context of a real, loving and personal relationship with our Heavenly Father and His desires for our life.

The key is understanding God’s call for our lives, on seeing Him and His truth in the scriptures; on knowing it in our minds and believing it in our hearts.  I feel confident that if knowing God is our focus, our students and our young adults will identify that truth and not only be willing to stand for it, they will proudly proclaim it to a world that, in its heart, desperately wants to hear it.