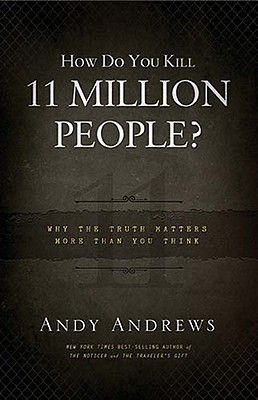 The answer is breathtakingly simple. And it is a method still being used by some elected leaders to achieve various goals today. How Do You Kill 11 Million People? Lie to them.

The holocaust is universally viewed as an absolutely horrible event. We have pictures and movies documenting the atrocities carried out by the Nazi’s and we have museums remembering those who were persecuted during that time. I have been to the United States Holocaust Memorial Museum in Washington DC twice now, and I will never forget what was shown there. However, in all that is said about this well documented historical event, how often is the question of how 11 million people were so easily controlled asked?

In the very short book, “How Do You Kill 11 Million People?” Andy Andrews points to several steps along the path where the Nazi leadership manipulated those they were seeking to exterminate, keeping them in the dark until it was too late for them to fight back. Andrews uses this history lesson to warn us of the consequences of blindly following what we are told.

It is a lesson we all need to hear. Too often we settle for what we are told by others; we fall in party lines, we assume whatever the media or the politicians or the preacher up front tells us, and we do not take time to think for ourselves. I am a pastor, and I teach teenagers, but I often remind them that it is not by job or my desire to tell them what to think; they have to seek out truth themselves. If they are convinced that the Bible says something contrary to what I am telling them, then by all means they must follow the Bible!

This sounds simple enough, but how often do we listen to others with a critical ear, and how often are we willing to stand up for what we believe despite opposition or, more radically, seek out answers to something we have heard but aren’t sure of? A little while ago I was asked by someone to evaluate a sermon that this person and I had sat through. I said that, while it was not one of those life-altering, “I’ll never be the same!” sermons, it was pretty good. The follow up question was, “Did you disagree with anything that was said?” My response was, “Of course I did!”

How often do you listen to anyone talk for 30 or 40 minutes and not disagree with anything that he other person said? While I appreciated the sermon, and while the pastor and I were and continue to be friends, we do not agree 100% on every aspect of theology. However, those minor differences do not prevent me from learning anything from his teaching; they can actually enhance the message because they cause us to think about what is being said, and they can help us to better understand what we believe.

Do you think this way, do you take time to critically consider what is being said, or have you fallen into the trap of simply accepting whatever a certain person or group of people have told you? Sometimes people are wrong, and sometimes people intentionally lie in order to manipulate others. Don’t be lazy – think for yourself, and stand for what you believe!

Why do the ages of our world’s greatest civilizations average around two hundred years?

Why do these civilizations all seem to follow the same identifiable sequence – from bondage to spiritual faith, from spiritual faith to courage, from courage to liberty, from liberty to abundance, from abundance to complacency, from complacency to apathy, from apathy to dependence, and finally from dependence back into bondage?

“How Do You Kill 11 Million People?”, by Andy Andrews

One thought on ““How Do You Kill 11 Million People?” – Andy Andrews”